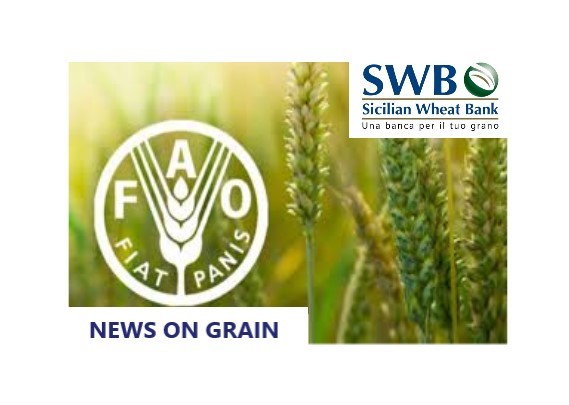 The Rome-based FAO also said that worldwide cereal harvests remained on course to hit an annual record in 2020, adding that early indications pointed to a further increase in production this year.

In add, looking ahead, FAO said it expected global cereal production to increase for a third consecutive year in 2021.

Global wheat production was seen hitting a new high of 785 million tonnes this year, up 1.4% from 2020 levels, driven by an anticipated sharp rebound across most of Europe and expectations of a record harvest in India.

Above-average outputs were also expected for maize, with a record harvest forecast for Brazil and a multi-year high predicted for South Africa.

Among major cereals, wheat export prices dropped the most, declining 2.4% on the month, reflecting good supplies and encouraging production prospects for the 2021 crops.

However, for the current 2020/21 marketing season, its forecast global cereal utilisation is forecast at 2.777 billion tonnes, 2.4% up on the previous year, driven largely by higher estimates of feed use of wheat and barley in China, where the livestock sector is recovering from African swine fever.

FAO’s vegetable oil price index, in contrast, surged 8.0% on the month to reach its highest level since June 2011, lifted by higher prices for palm, soy, rape and sunflower oils.

FAO raised its forecast for the 2020 cereal season to 2.765 billion tonnes from a previous estimate of 2.761 billion, pointing to a 2.0% increase year on year.