Yesterday’s October WASDE report showed some helpful data for wheat, but brought bearish news both for corn and soybeans.

Wheat prices rose as much as 1% higher, meantime.

On macro markets, oil prices dropped on this morning, after a mixed finish in the yesterday’s session, amid worries that soaring coal and natural gas prices in China, India and Europe will stoke inflation and slow global growth, reducing oil demand.

The market is also awaiting U.S. oil inventory data, delayed by a day following the Columbus Day holiday on Monday.

A strong U.S. dollar, trading near a one-year high, also weighed on oil prices, as it makes oil more expensive for those holding other currencies.

On the financial side, yesterday the International Monetary Fund cut its growth outlooks for the United States and other major economies on worries supply chain disruptions and cost pressures are holding back the global economic recovery from the coronavirus pandemic.

Meantime, three U.S. Federal Reserve policymakers on Tuesday, said the U.S. economy has healed enough for the central bank to begin to withdraw its crisis-era support.

As a result, shares slipped on Wall Street overnight.

Inthis context, Asian shares were on edge on this morning.

MSCI’s broadest index of Asia-Pacific shares outside Japan rose 0.1% in early trading, steadying after falling over 1% a day earlier, in what was its worst daily performance in three weeks.

Moves were muted in most markets.

Hong Kong’s stock market was closed in the morning because of a typhoon.

The US dollar hold at a one-year high meantime.

Coming back on grains market, last night’s futures trade saw row crop prices hit hard after higher production projections in the October WASDE report, as US corn yield at 176.5 and beans at 51.5 – both about half a bushel higher than surveyed expectations.

Global stocks are estimated as follows at the end of the 2021/2022 campaign:

Regular crop progress figures were also out yesterday, having been delayed by the holiday.

Corn harvest stood at 41% complete as of Sunday.

Winter wheat planting moved ahead 13% and has reached 60% complete.

On the crop rating, 60% of corn is considered good to excellent compared to 59% last week and 61% last year.

In soybeans 59% are considered good to excellent against 58% last week and 63% last year.

The export figures were at or above expectations.

In this context, corn basis bids were mostly steady to weak after dropping 1 to 10 cents lower at a handful of Midwestern locations.

Soybean basis bids trended as much as 20 cents higher at an Iowa processor and as much as 3 cents lower at an Ohio elevator, but most Midwestern locations remained steady.

Looking to South America, AgRural now estimates that 38% of Brazil’s first corn crop is planted, which is keeping pace with last year.

The big difference, though, is improved moisture this year.

Bean planting moved ahead 6%, reaching 10% compared to just 3% last year at this time.

Southern Brazil has received the best rains so far, but they have been moving north, and the long-range forecast suggests generally favorable conditions throughout the growing season.

In Argentina, corn planting increased a bit more than 4%, bringing it to just over 21% complete.

This is basically at the same place they were a year ago but is 4% behind average.

Bean planting will not begin in earnest for another week or so.

Unlike Brazil, though, the long-range weather forecast for this nation is not promising.

On European market, Euronext reacted sharply to the WASDE throwing down corn and oilseed complex sharply, while registered new highs for the season in wheat.

In soft wheat, however, the ministry revised its estimate downwards to 35.2 million tonnes against 36.1 posted last month.

In rapeseed, the harvest is left unchanged at 3.3 million tonnes.

On the other hand, per latest data released by the EU Commission, soft wheat exports are displayed on October 10, at 8.37 million tonnes against 6.02 last year to date, which is 39% above last year’s pace so far..

Barley exports are posted at 2.62 million tonnes against 2.40 last year.

Corn imports are posted at 3.79 million tonnes still on October 10 against 4.73 last year.

In rapeseed, imports are at 1.30 million tonnes against 1.87 last year.

However, they are set to pick up again today following USDA report.

Corn prices meantime showed good performance yesterday in Ukraine with a downward revision of production posted by the USDA on Ukraine to 38 million tonnes against 39 estimated last month.

From the Middle Kingdom, according to customs statistics, soybeans Chinese imports were only 6.88 million tonnes in September , compared to 9.79 million tonnes last year.

Margins among pig farmers in China, are in decline and are affecting demand.

On the otheer hand, China’s agriculture ministry lowered its 2021/22 corn production estimates to 10.669 billion bushels after heavy rains in the country’s northern region, which have damaged crops and delayed harvest there.

From Australia, Australia exported, 2,177,873 tonnes of wheat including durum in August, up 13 per cent from the 1,930,459t shipped in July, according to the latest data from the Australian Bureau of Statistics (ABS).

Meantime, wheat markets remained relatively unchanged yesterday across the grower bids while trade markets were a buck or two softer on the bid side along the East Coast.

SA APW track continues to trade $35 under Port Kembla zone and the wheat barley spread in SA is around $80-90.

We saw a similar theme in the barley market with grower bids largely unchanged for the day.

ASX wheat futures saw some action yesterday with volume trading in the Jan contract and traded down to a low of $342/t and settled the day out at $343/t.

The best bids in this tender were from Ukraine.

Japan issued a regular tender to purchase 120,000 t of food-quality wheat from the United States, Canada and Australia that closes on Thursday.

Of the total, 49% is expected to be sourced from the U.S.

The grain is for arrival by the end of January. 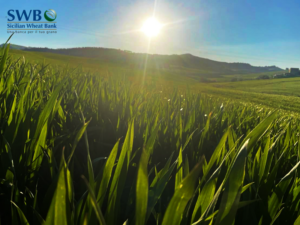 EU grain and oilseed prices eased about 1% across the board.

US markets were mixed, as corn prices tested modest gains,

Notably, Chicago wheat Mar contract was down US1.4 cents to 759.6c/bu;